Our former prime minister made it to the front page of Wikipedia recently, even if for all the wrong reasons: 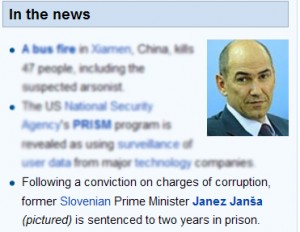 He was sentenced to two years in prison on corruption charges which is an all-too-rare distinction in a politician. In the unlikely event you’ve been reading Slovenian news, you’re familiar with the fact that the charges against him consisted of something along the lines of him “having accepted an offer of reward, at an unknown time and at an unknown location and in an unknown manner” for his role in securing a deal for a certain Finnish military vehicle manufacturer to supply Patria AMVs for the Slovenian Army. Basically, it sounds like this guy was convicted for having his paws in the cookie jar although we’re not sure how or when.

Though somewhat fascinated by the odd prominence of the word ‘unknown’ in these charges, I couldn’t be bothered to learn what exactly this strange formulation was supposed to mean when the case first gained prominence as I reckoned nothing much would come of it. There is something our young democracy shares with just about every other country I’ve ever read a newspaper from: steal enough and there’s no way you’ll get convicted. It’s quite simple really; if you help yourself to a hefty sum of somebody else’s money you can spend half of it on buying yourself powerful friends who will protect you from all harm and still have enough to lead a life of comfort. But if you make the mistake of stealing only what you need to survive you won’t have enough to buy yourself safety and the judicial system will be happy to make an example of you to appease the masses.

It’s the same story everywhere, so needless to say I found myself surprised to hear that our Mr Janša was found guilty. At first I feared his conviction was the Slovenian way of saying that our former PM officially lost the popularity contest that is Slovenian politics and ended up facing a couple of years behind bars simply because he was Janez Janša. A lot of people seem to dislike him, even if somewhat irrationally as, for the life of me, I can’t see what it is about him that makes him so much worse than many of the other people we Slovenians have had the stupidity to put in power. Starting to worry this might turn out to be a costly act of overzealousness on the part of our (judicial?) system that was going to backfire in the European Court of Human Rights, I took the time to read the prosecution’s take on what exactly went down here and how come such seemingly foggy charges could result in nothing less than a conviction. To not bother you with the details, all I’ll say is that after reading the prosecution’s explanation I was reasonably satisfied that they believed they did indeed have a case against him and that we, the long-suffering Slovenian taxpayers, are not particularly likely to end up footing the bill for his damages when he brings his case to the ECHR.

That having been said, I feel little emotion if any upon seeing one of our most prominent politicians convicted, save for a slight feeling of embarrassment; you know, if anyone besides us Slovenians could be bothered to take an interest in the goings on in our little country they’d have a good laugh. As for me, all my illusions about politicians being willing to behave honestly unless watched very closely had been shattered long ago and I don’t even miss them anymore.

The thing with politicians and any people with an unsavoury degree of clout is that they’re not superhuman. They’re just as prone to availing themselves to something that doesn’t belong to them as the average Joe. Just go and imagine what some of the Joes you know would be up to right now if we didn’t have the police, judges and our faithful Rottweilers keeping them in check. This, combined with the fact that the folks in power have way more opportunities to improve their financial position on the account of others than the rest of us, almost inevitably results in them owning way more nice stuff than their declared income could ever explain.

Funnily enough, one of the brightest people I know recently told me that he believed that people who took a bribe of, let’s say a couple of hundred Euros, should be punished more severely than those who misappropriated millions. Why? He believes that those willing to sell their morals for such a small sum are way worse than those who were enticed by the promise of real riches.

But I digress. What can we do about thieving, lying politicians? More in Part II, coming soon.