It’s a tough contest but if I had to say which animal made me laugh the hardest, the honour would go to a dog I had when I was little, Fia the Doberman pinscher. It used to be quite common in Slovenia for parents to let their small children keep big animals. I suppose they hoped such a responsibility would instil some wisdom in either the kids or the pets, not to mention the added benefit of having would-be child molesters reconsider their life choices after losing a limb to a protective pet.

(Admittedly, keeping a dog wasn’t always the complicated affair it’s cranked up to be nowadays, as pooches used to have a set of clearly-defined duties – to chaperone the children, to protect the house, to abstain from mauling people without due cause and to refrain from passing gas indoors – which gave them a sense of purpose, and effectively prevented the likes of Cesar Milan from making a career trying to talk some sense into people who don’t know what a dog is for and what to do with it.)

In the rural areas where parents continue to expect their children to be smart enough to make it in the world without grown-ups constantly shielding them from all potential sources of harm, you can still see tots leading huge dogs, horses, cattle and whatnot, and when they’re not doing that they’re likely driving a tractor. From what I gather from my recent explorations of the Slovenian countryside, the age of eight is still considered ideal for country children to start operating heavy machinery. Anyway, my Fia was super clever about many things, a keen student of human nature and an astute exploiter of its soft spots, but like so many animals she tended to come up short when met with certain pitfalls of physics. Luckily, she was not unlike me in the way she seemed to escape relatively unscathed from whatever she had gotten herself into.

But it wasn’t all laughs. She also taught me how it felt to be completely powerless. One day after a powerful storm, the neighbours’ kid and I took her to the river so that we could enjoy the abundance of flotsam that was waiting there for us to explore, just like we had done so many times before without incident. But, with Dobermans being too inquisitive for their own good and little girls being easily distracted, I let Fia out of my sight for a second, maybe two, and when I looked up I saw her wading through the ridge of a weir that we had camped downstream from, one so slippery even I had the sense not to tread upon. This one (pictured in a dry season): 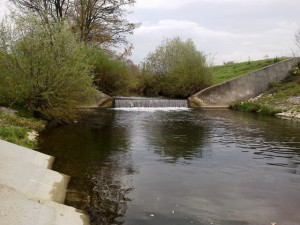 (It may look harmless enough, but as I, my pal and Fia learnt that day, this couldn’t be further from the truth.)

Keeping my eyes on Fia, I didn’t make a sound as I knew that if I called out to her, she would have turned, lost her footing and fallen into the raging waters of the catchment pool under the weir. That would be the very same waters that my parents, in their desperation to scare their offspring into staying out of trouble as they hadn’t made many extra, had warned me about with cautionary tales of the many who have perished in the treacherous vortices. Back then, I reckoned those stories largely fed on the same source as the legend of a maintenance guy who climbed up a high-voltage pylon near our house and lit up like a matchstick, i.e. my parents concern over my adventurous spirit, but I wasn’t totally sure it was all made up as one never knows with parents. Increasingly worried, I quietly started inching my way towards the catchment to quickly drag her out if she fell and the fact I couldn’t quite swim back then did little to stave off the feeling of impending doom. Surely enough, Fia slipped and plunged into the pool, where she was promptly sucked under and disappeared from sight. Her instant submersion was something neither she nor I had any idea could happen and we were both caught completely off-guard by it.

I started screaming for her and running up and down the catchment bank in desperation, and my pal the neighbours’ kid who saw the whole thing was doing exactly the same on his side of the river. I wanted to jump in but she was underwater and I couldn’t see where she was! To this day, I still remember counting to ten before Fia reappeared several metres downstream, looking as miserable as only a dog that has been under water for a freaking eternity can, and so tiny in comparison to the rainfall-augmented body of water, which she was at the mercy of. But that wasn’t to be the end of it. The catchment pool had a distinctive flow pattern that I, already a skilled fisher at a very tender age, knew exactly how to use to my advantage. Have you ever noticed how life never skips a chance to serve you some irony? Sure enough, I was treated to the sight of my dog, like a runaway bobber, being carried by the same current right back to the weir where she paddled frantically for a second before she was dunked again. Needless to say the idea of jumping into the waters that my dog, while admittedly a far better swimmer than me, was so plainly defenceless against was beginning to seem less bright. Brandishing a hefty piece of driftwood, I dashed downstream towards where she had re-emerged the first time around in the hope that she could grab onto it. But this time she resurfaced too far to the other side of the catchment for me to reach her. She must have gathered her composure and was paddling desperately towards the bank but it was obvious her strength was leaving her at about the same rate my wits were leaving me.

Seeing that I could do nothing to help her from where I was, I began wading into the water with an inane idea that I could grab onto her and we could somehow stay afloat together. If it wasn’t for my pal who held out a large stick when she was yet again being carried back towards the weir along his side of the catchment, she wouldn’t have made it and neither would have I. She bit down onto the make-shift rescue pole and he pulled her onto the bank where she collapsed at his feet, shivering. Fia went on to live for another thirteen quite eventful years and me and the neighbours’ kid remain close friends to this day.

Lesson learned: Always have a rope with a flotation device ready to pull a hapless canine to safety if the poor thing ends up swimming for its life.

Slippery surfaces would prove to be not only the bane of Fia’s existence but, by extension, also the cause of the heartiest laughter ever to have resonated in my home town. A year or so after the weir-dunking scare, Fia was snoozing in the hallway when a friend of my brother decided to pop around for a visit. I went to answer the doorbell when Fia awoke to realise she had slept through somebody’s arrival to the door. If you ever had a dog, you know that this is something no decent pooch can allow to happen, but should such a lapse occur anyway, the only proper remedy is to lunge at the door in such a barking furore that the stealthy trespasser will know better than to sneak up on a hard-working guard dog again. It was a race against time and Fia knew she had to get to the door no later than I did, no matter the cost. She plunged into the lobby the second I opened the door to reveal the intruder.

He turned out to be a mind-bogglingly large fellow, a guy so huge it would take a pack of hell-hounds rather than a single Doberman to bring him down. Faced with the formidable adversary, Fia figured the wise course of action would be to transition from her onslaught into an emergency braking manoeuvre as expediently as possible. Surely, she slipped on the tiles and landed on her side in a manner so abrupt she must have forgotten the proper procedure was to get back on her feet first and only then start running. She may have not been the most sure-footed dog in history but she was as strong as one would expect a fine specimen of her breed to be, and when she kicked out wildly while still on her side, she pushed off from a heavy sofa. This sent her spinning on the floor and when she kicked out again, the process repeated itself. The unexpected sight of a dog executing spectacular breakdancing moves is probably more than anyone can handle without wetting their panties and my brother’s friend and I proved to be no exception to the rule. With him reduced to a (very large) squealing heap by the door and me howling on the floor next to him, Fia judged her work was done, got up and retreated to her rug without so much as looking at both humans she had disarmed so completely with the sheer comedy power of her performance. I believe it wouldn’t have made any difference if a platoon of bloody-minded Special Forces had turned up on the doorstep that day; there’s no guy tough enough not to be rendered harmless by the awesome stunt that my K9 Unit pulled off.

Lesson learned: Wake your dog up before answering the doorbell so it doesn’t break its neck when trying to beat you to the door.

The most important lesson Fia taught me came many years later. She developed mammary gland cancer which she and a team of vets fought bravely. But one evening she stood up, walked slowly to each member of the household – even the cat – and gave them a nudge with her snout. Then she lay down again, fell asleep and never woke up. The gaping hole that the departure of my childhood companion left in my heart would never have healed if I hadn’t forced myself to face the fact that most animals were given a shorter time on Earth than us humans and that it was probably for the better. This way, we get to see our beloved pets grow up and get old and eventually die while they get to be fed, cared for, loved and protected throughout their lives. Imagine what it would be like if our pets routinely outlived us and we had to decide who we are going to bequeath them to when we pass away.

Next time you find yourself crying and swearing to never get another pet because an animal you loved dearly and did everything you could for just died, try to remember that you’ve done a good job caring for it until the end and that this is exactly how a pet’s life is supposed to come to its conclusion. And bear in mind that we are better equipped for dealing with grief than our pets – if you don’t believe me, you obviously haven’t heard of Hachikō the Akita.