(If it weren’t for the Croatians, we Slovenians would need to come up with our own jokes about Slovenia’s size but luckily enough our southern neighbours have been maintaining a steady supply of those for as long as I can remember.)

So why is it difficult to leave Slovenia if no-one is trying to keep you in? Well the biggest problem appears to be that it’s unreasonable to expect you’ll ever find a better place to live. I’m Slovenian and it took me years of socialising with English, American, Scottish and Irish expats who have taken up residence here to realise this. Unmoved by the steady stream of my anecdotal-evidence-based counter-arguments, they have been singing the praise to our people, the overall quality of life here, the delights of the local cuisine, the abundance of beauty spots and the conspicuous absence of crime, violent or otherwise; they were adamant that our politicians had nothing on theirs, slime-factor-wise, and that we Slovenians just didn’t realise how good we’re having it. Well it worked and now I can’t help but wonder why everybody can see what’s great about our country except for us, the natives, who can’t shut up about how everything is wrong here and threaten to emigrate the second we figure out where to go. Myself I have a good mind to start packing each time I pick up a Slovenian newspaper.

(Which is largely to do with the fact us Slovenians are the undisputed world champions of whining. If the average Italian can talk the hind legs of a donkey, we can make it scurry away on its front legs just to escape our sob stories. Seriously, we could chat up a guy on fire and gripe him into feeling sorry for us, that’s how good we are at bewailing our misfortunes. No point in arguing, we Slovenians will find a problem for every solution you can come up with. Now go and imagine what our newspapers read like.)

What can be said about Slovenia without leaning too far to the whiney side, is that this country is a great place to spend your time and money which works best if you’re living here while your earnings are coming in from somewhere else. If you actually need to earn a living here it’s a different story which gives some merit to our outstanding proclivity for complaining. It would seem so many people have been dodging taxes and milking the system dry for so long that several successive governments essentially gave up trying to get money from them and turned to squeezing more from us who have been contributing to their coffers all along. This is why the only people leaving Slovenia are Slovenians while everybody else is moving in. I consider this a good thing as we Slovenians are too darn willing to put up with anything as long as we’re free to moan about it, and I hope the new arrivals will refuse to adopt the same passive stance and instead demand a change for the better.

Anyway, that’s about enough lamenting from me, considering this post was originally intended to highlight some of the better points of living in Slovenia. My phone isn’t much of a camera and I’m not much of a photographer but even these two facts combined can’t ruin the amazing sights I stumble upon wherever I turn in my motherland. Recently, I was hiking around Šmihel nad Mozirjem, a place where time has stopped but not before they got Wi-Fi, cable and mobile reception, and here’s some of the stuff I saw. 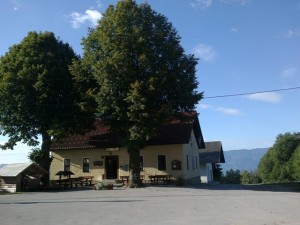 That’s the Šmihel town inn, with a miniature fire station right behind it lest the brave fire-fighters risk going thirsty. 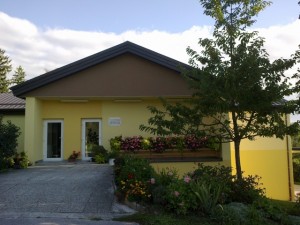 That’s the cutest, tiniest elementary school I’ve ever seen, and probably the friendliest-looking too. 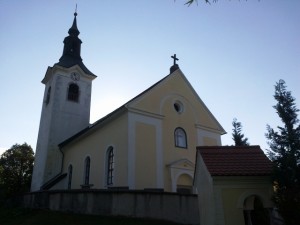 The Šmihel parish church with a wall protecting the family tombstones inside. 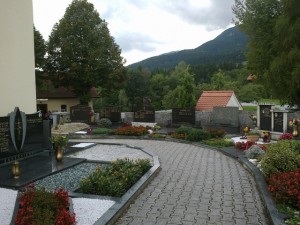 The tombstones, kept safe within the churchyard walls. I find it incredibly touching that the villagers wouldn’t even leave their graves out in the open for potential raiders to disturb. 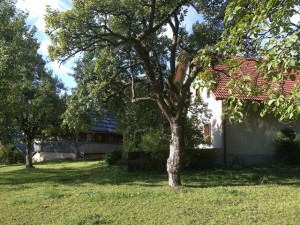 An old-style Slovenian homestead; if it wasn’t for the fancy farm machinery nearby you’d think you travelled back in time. 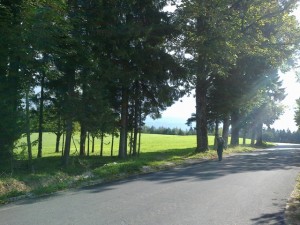 A large number of Slovenian roads are conveniently lined with trees and their cool shade makes for a lovely travel experience. 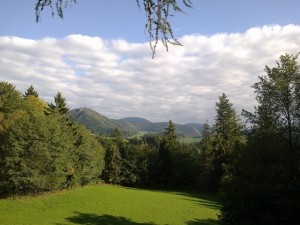 A typical view of the Slovenian countryside (from Šmihel in the Štajerska region). Greener than your neighbour’s lawn but never desolate; there’s evidence of sparse human settlement as far as the eye can see which is something I find very heart-warming. 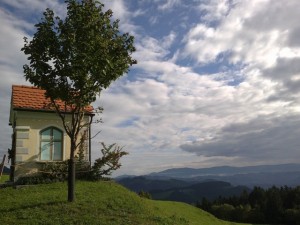 A traditional Slovenian shrine, surrounded by an electric fence to keep the more inquisitive among the free-roaming cattle at bay.

A view from one of the mountain pastures above Šmihel. Can you spot the sole eyesore in sight? Look to the left; there’s smoke billowing from a notorious coal-fired power plant in the city of Šoštanj. There have been controversial (to put it mildly) plans for the plant’s extension, universally loathed by everyone who’s not getting a cut of the humongous amount of money involved, i.e. about 99.99 percent of Slovenians.

One thing you can’t miss if you find yourself wandering around Slovenia is that a huge number of cattle is free-range. And most of them get to keep their horns which is something I wouldn’t think of mentioning if it wasn’t for an American acquaintance who thought my friend kept a herd of well-behaved bulls when she saw the horned beasts. Cattle in Slovenia tend to keep a respectful distance from hikers, or rather the electric fence separating them from the passers-by (and the other way around), but will occasionally deign to accept a hand-out. A fistful of dandelion was enticing enough for this cute heifer to approach. 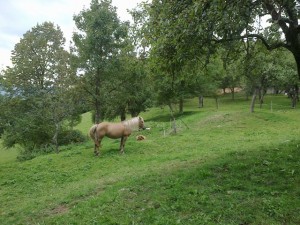 A Haflinger mare with her foal resting nearby. There’s hardly a spot in Slovenia with no horses in sight. I even saw a picture perfect Appaloosa with a foal, both dark with white, spotted rumps, which I understand is considered ideal in the breed. But I’m not going to show you that photo as I wouldn’t want to be implicated in somebody’s borrowing the sturdy equine for a joyride. 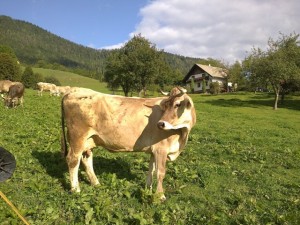 A particularly photogenic cow at one of the Šmihel farms. In their moving innocence, my fellow hikers inquired with the owner if he kept the cattle for milk or for meat. I took his reply of “Errr… milk…” as proof that nowadays even farmers feel they need to speak the language of political correctness. I’m vegetarian and I don’t eat cows at all, well I suppose that’s up for debate as cow parts have a sneaky tendency to pop up in the most unexpected of products, but since a lot of other people enjoy a steak I believe it’s great that most Slovenian cattle get to live their lives roaming the countryside instead of being tucked away from sight in some stomach-churning factory farm. 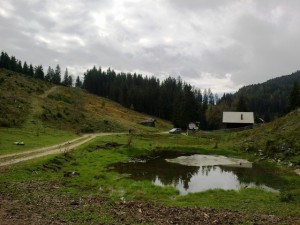 A view of a traditional mountain pasture with a waterhole. The vegetation looks patchy because, given half a chance, the cows will graze quite selectively and steer clear of certain plants the taste of which offends their refined palates. 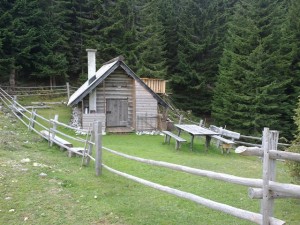 Cute as a button: a cattle herder’s cabin by the forest edge. Well at least it used to be one; by now it’s probably been converted into somebody’s summer getaway. 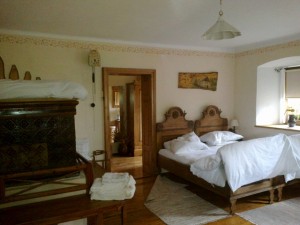 Now that’s how our people used to live in the countryside! This is the living room of a perfectly-restored traditional Slovenian home, now a four-star holiday home Gosteče. My pictures cannot do justice to the loving attention to detail with which the owners brought their birthplace back to its pristine state while still succeeding in sneaking a sauna in there. I understand the place is listed and here in Slovenia the requirements that go with such an exalted status are nothing short of eye-watering; even the napkins need to be as authentic as possible and they cost an arm and a leg. 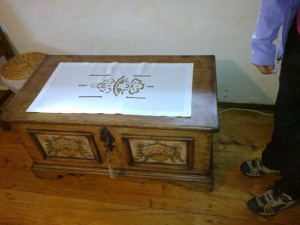 An ancient wooden chest in the Gosteče living room, nothing out of the ordinary… 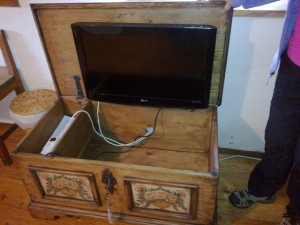 …but what decent old chest doesn’t contain a treasure? You can rent this time-capsule holiday home and still fall asleep watching HBO. 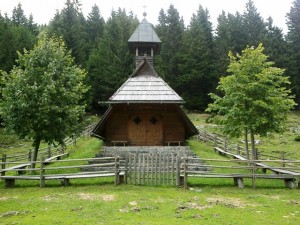 A lovely wooden chapel right below the Golte Ski Resort. 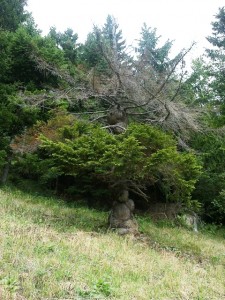 Just look at this tree! I don’t think I’ve ever seen a weirder one. It looks like a Buddha statue wearing a highly elaborate hat complete with a lightning rod on top. 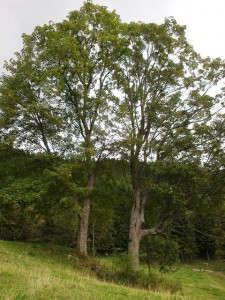 These two old pals have been providing shade for the grazing cattle for decades. 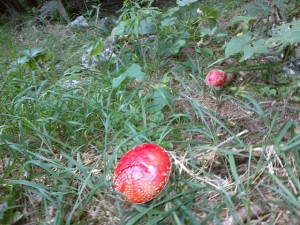 Slovenian woods are densely littered with all kinds of mushrooms; if you get there before the commercial mushroom pickers do you’ll have no trouble finding the right ingredients for a gourmet meal. Just make sure you observe the local regulations and don’t let yourself be caught with too-full a basket or you’ll be facing a steep fine. You probably know one has to be careful with mushrooms as one tiny mistake can leave you wandering around asking if somebody could lend you a kidney – if you’re lucky, that is. The eye-poppingly red ones pictured here are either hallucinogenic or lethal; I’m not certain and I can’t be bothered to find out for sure. There are rumours abound that significantly more mushrooms than we dare to try are in fact edible or even delicious if you prepare them right, but a gamble like this can have you featured in the obituary section way before your time. So make sure you know your mushrooms if you plan on anything more than admiring them. 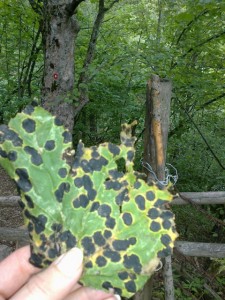 Usually it’s the frogs that are trying to look like leaves to confuse potential predators and this is the first time I’ve seen a leaf pretending to be a frog. When I sneakily left it on the footpath for my fellow hikers to see, they did indeed think a large frog was waiting to ambush them. 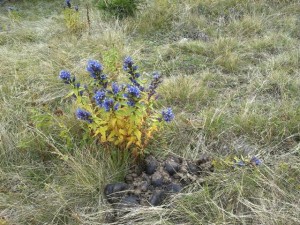 This photo might well be the perfect metaphor for my country: baby-blue flowers growing from a pile of horse manure. Nuff said.

Anyway, these are some of the things that make Slovenia so difficult to leave. Seriously, the place is addictive.